Last week, WBS team members Madeline, Claire, Emma and Brooks Morgan led a medieval art workshop at Pequot Library. We examined medieval literature, reflecting especially on the process of creating manuscripts. We also instructed on how to create illuminated manuscripts and write in different cursive styles. Additionally, we read medieval stories and taught Roman Numerals and the medieval calendar system–which operates by recognizing certain days and showing the distance of regular days from the special days to account for time.

During the Middle Ages, manuscripts were one of the few viable ways to preserve information. These books were created by first making parchment. The process of making parchment consisted of first obtaining goat or cow skin. Next, the skin would be soaked in water and lye and cleaned to remove any fibers. The skin would then be stretched to dry, and lastly, the skin would be cut into pieces of parchment. The parchment would then be sewn into gatherings, and the gatherings would be bound into a book. Lastly, clasps would be added to keep the book shut and protect the manuscript. Then, scribes would embark on the lengthy process of copying information into the book, and illuminating certain letters. Lastly, any images would be drawn or painted and the book would be complete.

On the first day, we along with Beth Beaudin, the Special Collections Consultant of Pequot Library, surveyed the process of manuscript making. We also began to teach basic cursive to the children. 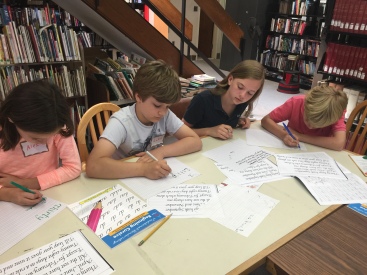 Every day we had a snack and recess break, where we played “discus” (frisbee) and “Bubonic Plague” (the game infection, where one person is “it”, and they along with people who have been tagged tag others until only one person is left). We also played “capture the crown”, which was our medieval version of capture the flag.

During the second day we introduced calligraphic cursive styles and how to write in medieval handwriting. The children transcribed poems and also practiced writing their names. We taught the children about the medieval calendar and how to use Roman Numerals. Towards the end of the day, everyone began creating the skeletons for their illuminated letters. We also visited The Birds of America, a book by John James Audubon with a compilation of life-size, chromolithographic American birds. 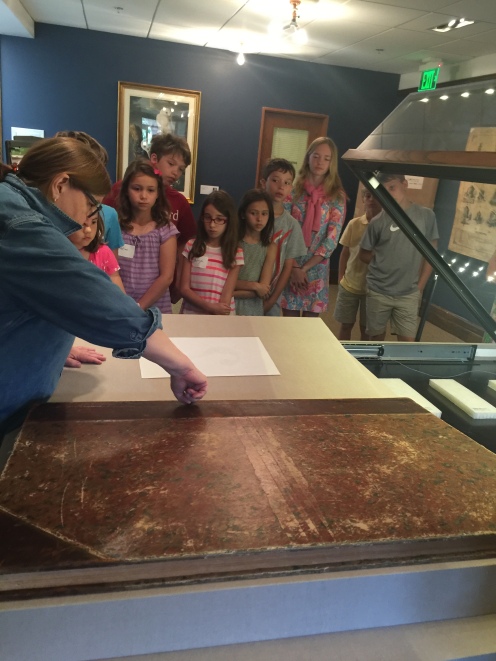 Everyone gathers around the Audubon book

For the third day, we focused on nobility, coats of arms, and finishing the illuminated letters. Everyone was able to design and create a coat of arms to wear which represented their interests or personality. The zenith of the week was being able to examine a book made in 1190–the oldest book in Pequot Library’s collection. The manuscript was a letter from Pope Gregory on proper behavior and conduct. We also had a guest speaker come and teach about Shakespeare, and we acted out scenes from A Midsummer Night’s Dream. 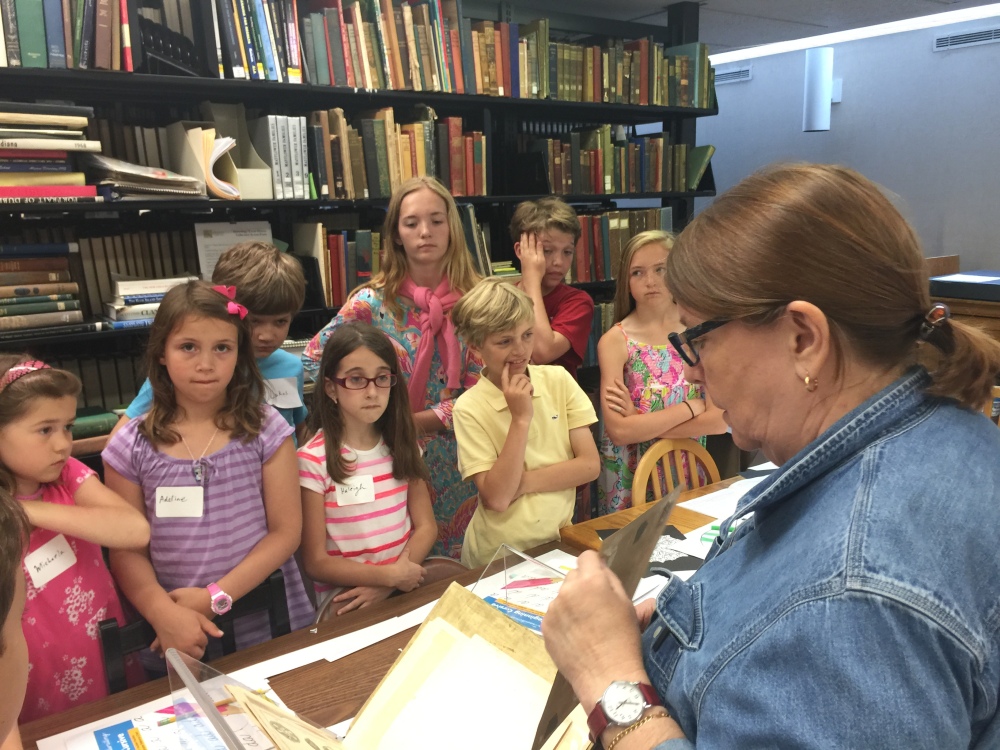 Examining the manuscript from 1190

The fairies from A Midsummer Night’s Dream

On the final day of camp, everyone made crowns and armor, finished the cursive books which we began on Monday, and reflected on everything learned during the week. The children collected their amassed number of projects, crowns, letters, books and sheets, and we headed out to play our final game of “capture the crown”.

It was incredible to immerse ourselves and other children in medieval studies, and we will look forward to continuing the medieval theme with the reading program this summer at Pequot Library.