Anything can matter in life, family, friends, school, and even sports. Something that we don’t always realize that is just as important is time. You never know what your next step will be. Sometimes, people wish time away. They want to meet their future and see what happens. They forget, that the present is just as, or more important than the next step in their life.

Humans do not live forever. There is a limit to your time on earth, “Time flies over us, but leaves its shadow behind,” Nathaniel Hawthorne. You only have a certain amount of time to do the opportunities that are given to you in life. Sometimes, your life on earth can be cut short. I had a friend who was in Wyoming on vacation in the summer. He died in a very unfortunate accident at the age of 14 on July 7th, 2018. He lived his life to the fullest even though it was cut short. He was proud to have been admitted to a prestigious Catholic school in Houston, but would never graduate.

My friend Max made a good impression on many people. Even though he is now gone, everybody he met remembers him, because of his kindness and compassion. He was a great lacrosse player. I remember the first day of lacrosse in Texas was scary. I was in 5th grade, and was by far the smallest. He came over to me and we talked, and it was the start of a great friendship with many long-lasting memories.

I remember wrestling on the trampoline. I remember when we went to the Natural Science Museum of Houston. He visited Connecticut over winter. We went sledding on the Patterson golf course and ran over a rabbit skull. I remember going to New York with him and going to Central Park and seeing many other famous places in the city. I remember, later that spring, we saw an Army Navy lacrosse game at West Point, because his brother played at West Point. It went into overtime, and unfortunately, Navy won. I was blessed to share so many other memories with Max. This proves that you should never waste time and always take the opportunities that are given to you. We constantly complain about having to wait, but time slowly ticks away. Once you are elderly, you will look back on your life and wish you had done something worthwhile.

Many people are not granted the same opportunities that we are. For example, people anywhere, even in our own country do not get the chance to see New York City. We take going to New York for granted because we have been there before.

This is why my friend was such a good person. He never took any of his opportunities for granted. When Max visited us he helped our charity, The Wonderland BookSavers run an event in Bridgeport, CT. He helped us with our Destination Imagination play and also put his handprint on the handprint poster along with other kids.

We decided, since Max would never graduate from his Catholic high school, to create a four-year scholarship for one high school student, attending the Red Cloud Indian School on Pine Ridge reservation in South Dakota, in his honor. It is called the Max Finney Foundation Scholarship in honor of my friend. The Wonderland BookSavers are paying for it with the money we raised from our annual lemonade stand. The Board of the school decided that it will be granted to a boy who is entering his freshman year, this September, at Red Cloud Indian School. Max lived his life to the fullest and even though he died at such a young age, he still accomplished so much. Never again will I take anything for granted, or wish time away. Thank you, Max, for all of the memories, and I will always try to live up to the example you have set in your own short life. 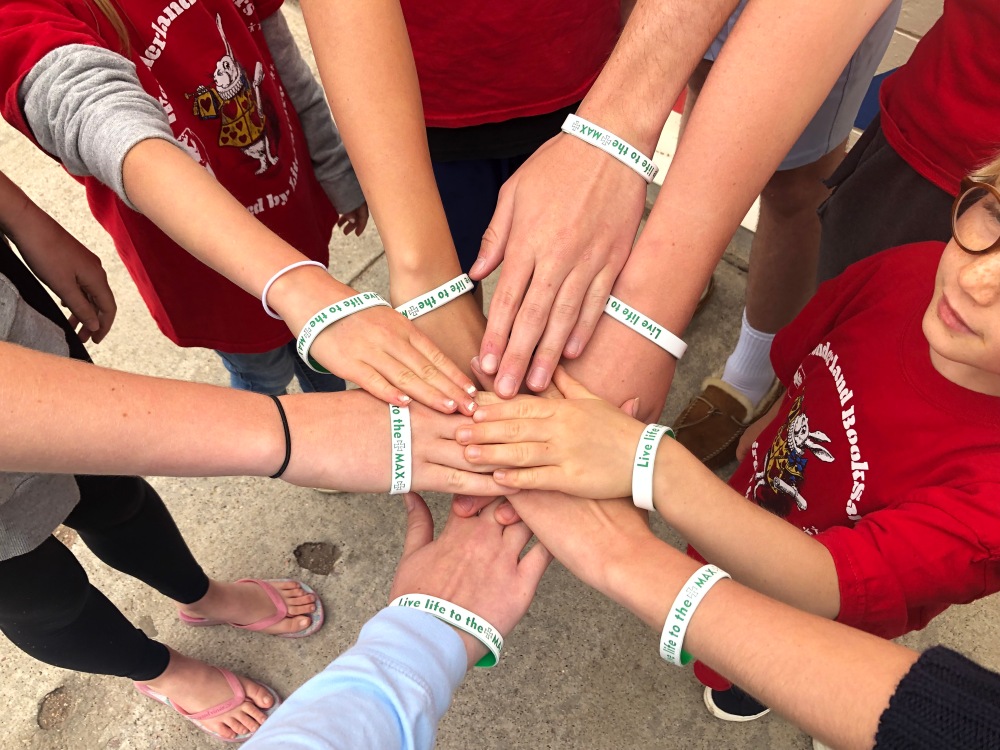 Max’s family has established a foundation in his memory.  This foundation provides scholarships for young students, like Max.  If you are interested in learning more, please contact them directly at Max Finney Foundation