On Friday, the Wonderland BookSavers ventured to Pequot Library for Shakespeare-themed tours and family fun night. The day began with a tour of Pequot’s primary and secondary Shakespearian sources by Susie Whitcomb and Beth Beaudin, both of Yale University. As we peered over the protective glass cases at ornate illustrations and fading folios of William Shakespeare’s plays, Susie Whitcomb, who is also our community partner at Haitian Education Initiatives, spoke in great depth about the history of the books. Each folio, quarto and octavo had a unique historical background; the folios were printed of the Gutenburg press, which implies that Shakespearian texts were highly sought after, since printing on a press would have required a vast conglomeration of resources and effort. Some of the smaller books were even used as social props for learned people to attract scholarly suitors! 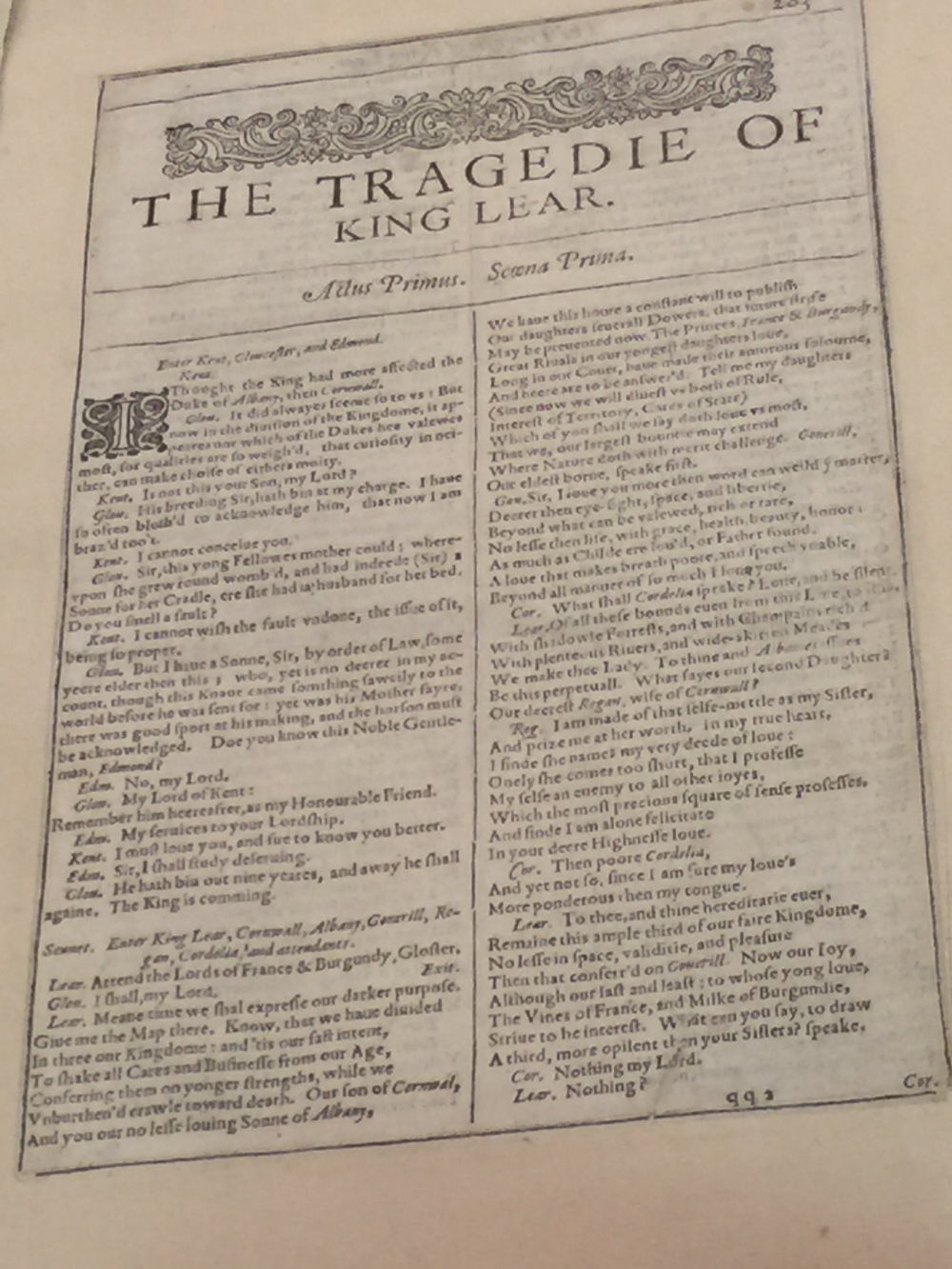 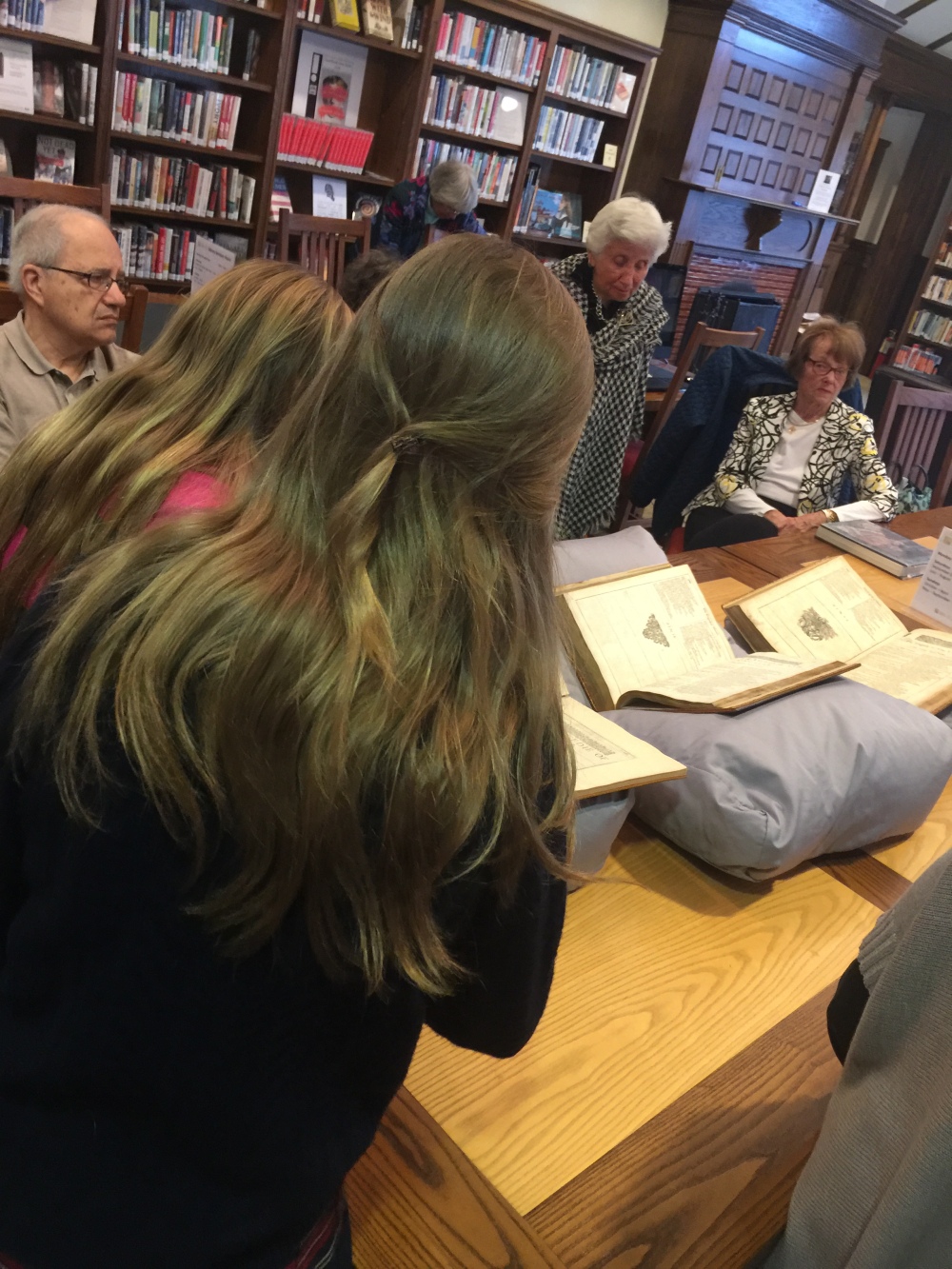 After talking about the origins of the texts, including the interesting fact that no text is exactly alike, due to thousands of corrections made over printing, the conversation took an intriguing twist; the guides began talking about the significance of costume as portrayed in every individual performance of any Shakespearian play. Many groups try to maintain historical accuracy by donning costumes reflective of the Elizabethan era. Contrarily, other groups often pinpoint a certain era from which parallels can be drawn between happenings of the period to happenings in the play, or choose to work in completely modern attire, figuring that that is what Shakespeare would have strived for even in the Elizabethan era; modern clothing. As Dr. Whitcomb phrased it, “they thought they were being cool”! Some of the books relayed these messages for themselves; one book, published circa 1935, sported figures drawn in such Art Deco fashion that they were reminiscent of figures found on Greek and Roman pots. Overall, the analysis of costuming practices throughout Shakespearian literature brought engaging depth to the tour.

Following the dissipation of the group, we visited the remainder of the exhibition, including a fascinating canvas covered with common saying that we have derived from William Shakespeare’s plays. 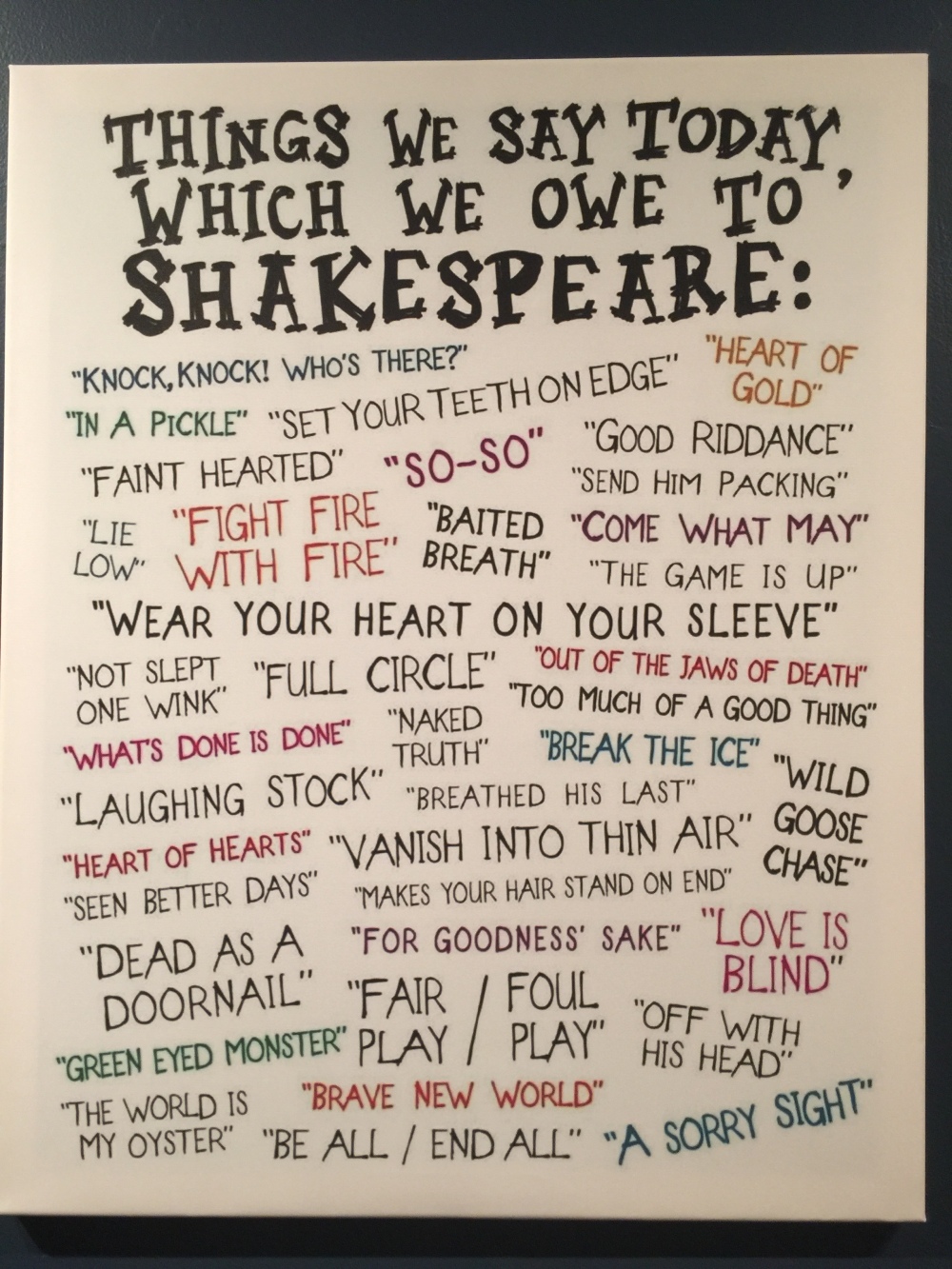 A few hours later, we returned for Pequot Library’s Shakespeare Family Festival. Among the activities were guest speakers, fencing demonstrations, recitations, and crafts. First, we listened as Elise Broach, author of Shakespeare’s Secret, delved into the history behind her novel, including the perplexing arguments on whether William Shakespeare actually wrote the plays that he is credited with writing, or whether they were the work of someone else. Afterwards, we headed for the auditorium, alive with drama clubs reciting sonnets and acting out scenes, and the sword fighting demonstrations.

The Shakespeare Family Festival at our local library connected a community through a simple yet beautiful prospect: to fuel the flame of enthusiasm over Shakespeare’s immortal works by renewing interest in the history embedded within his texts. This event provided continued motivation for us to spread quality literature worldwide, as we witnessed the effects of an author who lived over 500 years ago.